As a child, I lived in Kiama New South Wales, a small town by the sea. 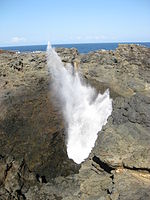 Occasionally walking to school,during the summer king tides,  I would see the world famous Blowhole in action. Waves would break high and wide, the spray would envelop  the lighthouse like smoke around a candle.

Similarly, while living at New Farm in Brisbane, I would take the long walk to work. First I would sidle down to the ferry terminal at New Farm Park, and take the ferry to work. Each trip the Brisbane River was different.

When I arrived at work, I felt renewed and refreshed.

Having moved to Melbourne, walking by the water is an experience I have revisited. I live at Port Melbourne and occasionally walk to work via the esplanade.

It still changes my whole day. Some days the sea is frosted sky blue glass. I feel like stopping and skipping stones. Other times the sea is a green blue wave concrete mixer topped by white crested waves. I stop and set aside the idea of a swim. Other times its a blue skin like parchment. I stop and think about growing old.

All I’ve done is look for something new in a dull and boring world. Most times I find it.

But still there’s something missing here. Why do I love walking by the water?

One clue is that when I hear that phrase, I immediately think of the sublime Eva Cassidy singing Wade in the Water.

But it wasn’t until the other night, that the next clue completed the jigsaw. I now realise why I love walking by the water.

This night was hot and perfectly still. And though a reasonable distance from the water I heard it. The waves.

And it brought back memories of an earlier time.  Where even though I was even more distant from the sea, I heard it too. The ebb and flow of the waves in the far distance quietly lulling me and calming me, renewing and refreshing me.

The next time I walked by the water, I really heard the waves.

Welcome! This infinitesimal corner of the web is a place where my fairy tales, poems, and images collect and remind me of where I've been. Enjoy and feel free to comment on your parallel existence! Peter Ellis