It was a slight tap, so soft I could barely tell. Perhaps the venetians had touched the window in another room. I stretched out with my book and waited. 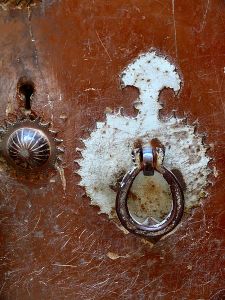 Old door knock and handle at the historical center of Yazd.
Taken at yazd, Province of Yazd, Iran, April 2009.

No, there it was again. Perhaps a visitor. I stood up from my desk. I pushed back the chair. I stole to the front door and opened it.

A man stood six paces in front of the footpath and six back from the front door. He didn’t speak at first.  He was probably in his late thirties. In his hands he had an open loose-leaf folder.  The first thing I noticed were the drawings in that folder. The colours seemed familiar. And then I thought I’m sure I’ve seen diagrams like that before.

Then he stepped forward and spoke to me. Immediately I realised that he was hearing impaired. Then I knew why I recognised the diagrams. They were the same as those in a course I attended a few months ago.

As he spoke, he started pointing at the diagrams. I looked and saw that they were a pictorial introduction.

The course I attended was about communicating with deaf or hearing impaired people. The key point was to speak and gesture, as my visitor was doing now. In turn I read the introductory diagrams and responded as best as I could.  In truth, I think I did very poorly. I felt frustrated with myself. But he didn’t seem to mind at all. Despite the communication gap, there was no sense of frustration from him at all. That helped.

Yet he seemed to have a touch of the theatrical performer in him.  The way he was comfortable door-knocking strangers homes. The way he communicated without fear of the cost. The  way he was generous with his time and tolerant of my inability without concern for his own. The way he bounced from foot to foot as he spoke and gestured.  All from an unfettered  sense of joy and generosity.

What sort of person would do that? Certainly not the classic door-to-door salesperson. But I had no immediate answer.

Over the course of the next few weeks, I turned the puzzle over in my head. There was something both familiar and unfamiliar about him.

What sort of person would do that?

The clue finally came to me. He seemed to have visited me from another time. Then the answer. I laughed out loud. He was no door-to-door salesman. No I had been visited by a medieval travelling minstrel, a modern-day troubadour, from another time.

Welcome to my infinitesimal corner on the web. Peruse the photos, poems, and stories collecting here like leaves from a tree.