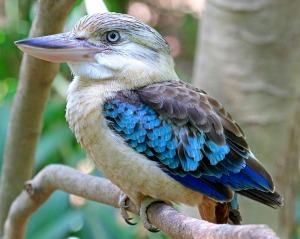 At laughter yoga : a group activity where people gather and voluntarily laugh until they don’t have to!!!
But how did I find it? By accident. It’s 2004 and I’ve hurt my back. With little relief in sight, I discover that my work is providing free massages and I sign up.
After a few sessions, my back came good. But then the masseuse started talking to me (isn’t it usually the other way around?).
I mentioned I was separated and wanted to meet new people. And she had an idea.
She suggested I take the ferry to New Farm Park in Brisbane and try laughter yoga.
I checked the web site. I set my alarm early that Saturday morning. And sidled to the ferry at South Bank. And alighted near the second Moreton Bay fig tree.
I had already passed the people practising tai chi. And the  group wielding sticks instead of light sabres. My thought was somehow laughter yoga can’t be out of place at all.
When I arrived a small group of people had gathered. I couldn’t tell the regulars from the new starters.
When the leader arrived we began. By introducing ourselves…with a laugh. And each time it was the same for me. I felt silly at first. But then the awkwardness passed. And then, I don’t care what anyone thinks, I’m laughing anyway.  It helped that every so often people would walk past and start laughing for no reason too! 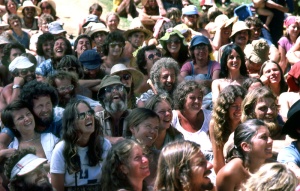 Terms of Use: 1/ All users of this image are required to attribute this work to “Nambassa Trust and Peter Terry” and the URL: ” http://www.nambassa.com ” is to accompany all use. 2/ Attribution. You must attribute the work in the manner specified by the author or licensor. 3/ For any reuse or distribution, you must make clear to others the license terms of this work. Statement by Nambassa Trust and Peter Terry Mombas 13:33, 25 August 2006 (UTC)

The exercises would vary week from week and are too many to mention.  One of the most notable was the belly laugh. The aim was to laugh so deeply that the laugh went to your belly and feel it as you did so. If done right, your whole body quivered!
But the one I loved was the kookaburra laugh. One of our regulars would lead this. She would stand in the middle of the group. It sounded just like the far away cackle. As she continued she would lean over and you could just hear her laugh. Then she would stand up and extend her arms high as she laughed louder and louder. The best part was that she was the perfect mimic of a real kookaburra. In the end it was contagious. And it worked everytime.
Every so often I hear a kookaburra. And start laughing for no reason. For the lesson I learnt was you can (and should) laugh anywhere and anytime regardless of circumstances. That was priceless.