Perhaps I should have bought the game and computer too!

It began with Nicole Matejic. She was reminiscing about her old Apple personal computer experiences. In passing she mentioned the children’s game Just Grandma and Me (based on a popular children’s book). 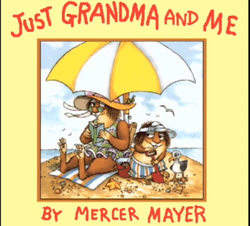 Just Grandma and Me

I was working in Canberra. At that time, I wanted to buy a PC or perhaps an Apple Mac? Part of my role was supporting PCs, yes 286s, XTs and ATs!

Our company owned one Apple, a soothing relief to support as it ran Adobe Pagemaker, a desktop publisher (DTP), one of the few pieces of software that made me look good. So began my fascination with DTP but that is many blogs away! My workmate too was an Apple evangelist.  Which left me wavering.

To resolve my dilemma, I decided to check the PCs and Apples out. That particular Saturday afternoon, my wife and new son needed sleep. So I took my opportunity. I thought I could take my three year old daughter, do my research, and bore her with tech stuff till she falls asleep on the drive home. That was the well thought out, yet to be well executed plan.

The last shop was an Apple shopfront near Woden in Canberra. I park the car, open the back door and unstrap my daughter. It’s late Saturday afternoon and she should be showing the first signs of fatigue. Not now, not ever as it turned out. We sidle into the shop hand-in-hand and I ask the tech guy  about the merits of the Apple! Of course he told me in detail. But I say, there aren’t enough Mac applications versus PC.

He can’t counter my point. We both look down and see that her ladyship isn’t too interested in these finer technical details. He says how’s about trying out a few children’s games. Sounds fine and fair enough to me.

I sit her on a stool while the tech guy runs up Just Grandma and Me. This shouldn’t take too long, I think. But in the moment, I was worried.

Not at how precarious her perch was. She wasn’t moving so it didn’t matter. No. It was that dreadful moment when  two eyes turn towards me and ask, “Daddy how do you work this?” That moment would have to wait until she was running Windows Millennium on her laptop!

But that didn’t happen at all. For now the mouse was gliding over the game scenes like thread through silk. Each  click on each character brought joyous laughter at each unique antic. And then she would click through to the next part of an interesting and engaging story.

Wait a minute! I have to back up and take stock now. For I’m not watching this from afar anymore. I had been taken in too. Yes there was the easy technology. But the story within the game had fascinated me (as good stories still do…)

But her ladyship didn’t care for such thoughts of philosophical grandeur. She was signed up for life. As I was just about to find out.

For it was now closing time. And time to go home. No. No. No. Yes (Me!). All right I’m lodging an official protest. And an official request. For the game and a Mac.

I bought a PC. Windows 3.1 and Dos 3.22 powered by a 386  hamster wheel topped by 2 mega dabs of Ram.I used it to play Tetris and log in to work via terminal emulator and attached modem. ZZzz….

I relented again. I  bought the PC version of Just Grandma and Me. It was probably more to assuage my guilt as the original protest had been withdrawn or forgotten. But somehow it didn’t have that beyond cardboard cutout charm of the original…check out the interactive YouTube version!