Dining With Strangers (Eat With Me Melbourne)

It’s not speed dating! And it’s not dinner for five! It’s Eat With Me’s Dining With Strangers! 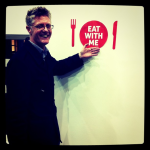 For a small cost, I received one drink, two meal courses and way more than three introductions. All at The Sharing House South Wharf Melbourne.

As it turned out, I almost turned up sopping wet. But I made it. Upon entering the restaurant I was ushered to   the Eat With Me group. A drink was handed to me. Then I was welcomed by Bethany and Liisa (the organisers of Eat With Me) who to their eternal credit remembered me from the July 2011 event! Dining with strangers indeed!!

To find our place at the table, we were all given a present. The present unwrapped turned out to be a piece of Lego which matched our seat at the table. After almost mixing lime green and dark green I found my place (amongst the writers’ section).

First course was chickpea chips and tomato sauce which was unique and tasty! The conversation continued. On my leftwas a public relations consultant who worked in tourism, television and film. From her I received some sage advice about my love life! Opposite her a magician and comedian. Next to me was Chelsea who also was a writer, blogger and involved in Eat With Me. When she said she was from British Columbia I said Victoria instead of Vancouver!! And got it right!!

What I forgot to mention was the centrepiece or conversation starter in the middle of the table!

Duplo shapes with words stuck on them to encourage the writers in us. Funnily enough the writers corner stuck with the words and tried to create something rather than dismantling the shape and creating something completely new!

The next course was Beef Wellington and a beautiful beetroot and walnut salad. No one to the left or right or opposite me had had it before except me (and it was a bucks’ night so my memory wasn’t sound). Beautiful!

As the conversation continued, I met a fabric designer and an intern.

Then came the negotiation part of the evening! Dessert! Strawberries, meringue, cream or chocolate mousse, ice cream, salted caramel. It was all divided equally and there was much left over. And now I know I will eat through chocolate to reach salted caramel!!

And the conversation continued! It was relaxed just like a laid back dinner party with friends and friends of friends! Thoroughly recommended and commended!!

3 responses to “Dining With Strangers (Eat With Me Melbourne)”