Nothing prepared me for the drive off the freeway from Bandararainke International Airport into the streets of Colombo.

We were met at our hotel by a bus. It was not on time but that didn’t matter! We then negotiated some minor traffic and entered a freeway. I started to relax. I thought: a couple of hours of Western-style cruising and sight-seeing in comfort. But it was not to be.

Twenty or so kilometres, we left the four-lane motorway and entered  Colombo.

Then the fun began. We went from normal traffic to a scene of almost complete confusion in seconds. 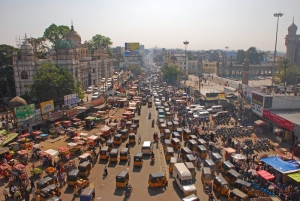 Cars, buses, trucks and three-wheeled tuk-tuks moving forward in a churning mass. Traffic appearing and disappearing, from left to right and back again.  Cars entering the road from left and right, their drivers’ eyes firmly fixed on the road ahead. They did not see or weren’t aware of our bus lurching towards them. Trucks slowly inching their way forward as the traffic parted before them like herds of sheep.

Pedestrians both individuals or groups  either sprinting at speed or striding across the road fas if it were a daily slow stroll.  Bicycles, motorbikes and those dreaded tuk-tuks on the road, off the road and/or touching our bus. Horns being sounded seemingly at random. The driver of our bus conversing with his companion and the traffic all at once.

It seemed at first, to my untrained eyes,  like a scene of mass panic or complete confusion. But somehow it worked. No-one was hurt. No cars, trucks and tuk-tuks were injured in the making of this movie. Not even a scratch.

It helped that I felt reasonably safe in a bus. I suppose I was more fascinated than scared. So I didn’t get involved.

And the return to Colombo was even easier. It was Sri Lanka New Year’s Eve, so the traffic was extremely light even when we entered the city. Nearly no cars, motorbikes, bicycles only extra tuk-tuks who were trying to out-do each other.

But I felt myself starting to become annoyed. Normally as a passenger, I don’t offer any comment. If I do it’s rare.  Today I found myselfwalking that evil path towards Road Rage.

But I caught myself this time. I offered one comment. Then I started laughing. My thought was, “What difference would my road rage make here?” Nothing!

But then I had a better thought.

I said to the driver that Sri Lanka is obviously training the next generation of future Formula 1 grand prix car drivers and MotoGP motorcyclists. He laughed and agreed.

Or even tuk-tuk races. Now I’d like to see that.